As living organisms, trees can contract diseases that compromise their health and appearance. The sooner you discover an issue plaguing one, the more effective the tree treatments from your local arborist will be. Here, learn about some of the most common conditions affecting trees throughout Alabama to help you identify symptoms early.

What Diseases Affect Trees in Alabama?

This disease exclusively affects the longleaf pine species and is caused by the fungus Mycosphaerella dearnessii. It appears as gray-green spots on the bark and needles. Yellow bands may also form on the needles before they turn brown and fall off the tree. Controlled burning prevents the disease from spreading, and professional fungicide applications save trees in the early stages of blight. 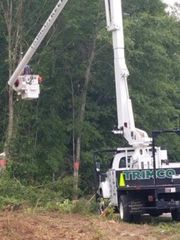 Thinning crowns, excessive resin, and bole, branch, and shoot cankers make up pitch canker symptoms, a disease that comes from the Fusarium subglutinans fungus. The disease targets planted pines throughout the Yellowhammer State, causing growth issues and abnormalities that spread quickly between trees.

Affected pines often die quickly, and tree treatments typically do not save them. Controlling the disease and preventing it from spreading remains the most effective option, such as removing pine tip moths and deodar weevils that carry the fungus.

Slash and loblolly pines are among the most susceptible to fusiform rust, a disease from the fungus Cronartium fusiforme that causes brown and purple leaves. Other symptoms include weak stems that break easily and spindle-shaped inflammation on branches, which produce orange spores in the spring. Spores travel with the wind to infect other trees, such as laurel and willow oaks. Tree treatment includes fungicide to remove the spores and restore the health of the plant.

Littleleaf attacks the root systems of slash, longleaf, shortleaf, and loblolly pines, causing their needles to appear short and yellow as the disease removes nutrients from the soil. It comes from the Phytophthora cinnamomi fungus and typically affects trees in areas with poor drainage since wet soil allows fungi to thrive. Soil drainage management and fungicide are usually enough to save infected trees.

Rely on the arborists at TrimCo Tree Experts to provide tree treatments that keep your Alabama perennials healthy and beautiful. The tree specialists serve residents throughout Dothan and the entire Wiregrass area, including Dale, Henry, Houston, and Barber counties. They are certified and trained to handle everything tree-related and have workers’ compensation insurance. Call (334) 791-2087 to make an appointment. Learn more about tree treatment and removal services online.