The History of Hawaiian Pizza

Pizza is among the most popular comfort foods in the U.S., and Americans consume approximately 23 pounds of slices annually. Though pies often feature traditional toppings such as pepperoni, Italian sausage, and fresh vegetables, pizza places may use more unusual ingredients in their creation. Hawaiian pizza, for instance, consists of crisp crust, savory sauce, and cheese topped with pineapple and Canadian bacon. Here's more about the origins and evolution of this uniquely delicious pie.

Contrary to its name, Hawaiian pizza was not invented in the North Pacific archipelago. Rather, it has origins in Chatham, which is a small town in Ontario, Canada, near Detroit. Sam Panopoulos, a Greek immigrant to Canada, was the first to put pineapple on pizza.

While visiting Naples, Italy, in 1954, he had his first bite of pizza, which made a powerful impression on him. He decided to open a restaurant in Chatham, which he called the Satellite. However, he did not serve pizza at first, since the dish was still relatively unknown in Canada. As the restaurant became more successful, Panopoulos started to get creative with menu offerings. In 1962, he experimented with putting a can of sliced pineapple on pizza, which he began serving to his customers. 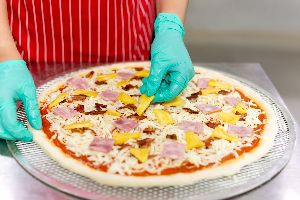 Panopoulos's decision to add pineapple to pizza may have been influenced by his love of Chinese-American food. Additionally, he might have been inspired by tiki culture, which became popular when troops who had served in World War II returned from the South Pacific, and after Hawaii became a U.S. state in 1959.

Since Hawaiian cuisine features sweet and sour flavors, Panopoulos may have wanted to recreate this combination on pizza by topping pies with pineapple. Once he started adding ham with pineapple to provide salty contrast with the sweet fruit, this marked the official birth of what he coined "Hawaiian pizza."

Hawaiian pizza gradually became one of the most beloved menu items at the Satellite. News about this innovative pie spread throughout Canada and eventually arrived in the U.S. Pizza places began offering their own versions of it, typically topped with pineapple and ham or Canadian bacon.

Since Panopoulos never patented the name, these pizzerias called it "Hawaiian pizza." Though there is some debate among contemporary pizza lovers as to whether pineapple actually belongs on pizza, the fact remains that the Hawaiian pie is a mainstay at pizzerias worldwide, served alongside classics such as meat lover's and pepperoni.

When you're in the mood for Hawaiian pizza, head to Papa Rocco's. This pizza place offers specialty pies along with raw oysters, Italian fare, and happy hour drinks to patrons in Gulf Shores, AL. Call (251) 948-7262 to place an order for carryout, and visit the website to browse their menu.