The Evolution of Magic

By Marco The Magician

Magic has been used for entertainment as far back as during the days of ancient Egypt and Rome. However, it would be several centuries before magicians would perform their illusions and tricks on grand theaters like they do today. This practice started in the mid-1800s when Jean Eugene Robert-Houdin brought street acts to the stage, where magicians performed for wealthy audiences for the first time. Since then, the art of magic has steadily evolved and changed as more people have come to the craft and integrated advances in technology and showmanship into their acts.

From Harry Houdini to Dai Vernon, some of the greatest magicians to baffle their audiences came to prominence during the first half of the 20th century. Developing stage acts became a respectable career during this period. Audiences came out to lavish theaters in droves to see master magicians make objects and people disappear, pull animals out of thin air, and make objects float across the stage. 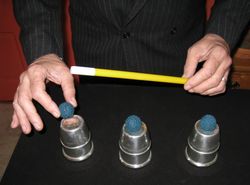 Although magic was once believed to be a mystical art, audiences eventually realized that magic was a craft requiring consummate skill and showmanship. While they may not have known how Houdini escaped from a straitjacket while trapped inside a chest or underwater, most realized that he was practicing a honed act.

Throughout this century, seven types of illusions became recognized among the magic community. These include production, vanishing, transformation, restoration, teleportation, penetration, levitation, and secrecy.

To elevate and preserve the art of magic, two groups came into being: The Society of American Magicians and The Magic Circle. Their goals are to teach, advance, and preserve magic as a performing art. They also promote fellowship among magicians and work to improve the ethical standards of the community.

Toward the end of the 20th century, magic stores could be found across the U.S., and many magicians had become a household name thanks to regular television appearances and specials. David Copperfield, famed for making the Statue of Liberty disappear, career has earned 21 Emmy awards and 11 Guinness World Records. The widespread popularity of David Copperfield and his peers, such as Penn and Teller, have helped usher in the rise of celebrity magicians such as Criss Angel and David Blaine.

Celebrate your child’s innate sense of wonder by having Marco The Magician perform on their special day. Based in Cold Spring, NY, Marco is a professional entertainer and performs at kid’s birthday parties, bar mitzvah’s, and corporate events. He also teaches aspiring magicians around the world. Book Marco for your kid’s party by calling (212) 502-0148, and learn more about his services by visiting his website.