About Marco The Magician

Marco The Magician is a full time Professional Entertainer that has mystified children and adults around the World. Marco is regularly hired to mystify and freak people out at private events, birthday parties, bar mitzvah's and corporate events.

CLIENTS INCLUDE: Marco has performed alongside celebrities such as Joan Rivers, Lou Reed and Jimmy Fallon. His client list includes companies like Scholastic Books, the NBA, and Google.

ETCHED IN MAGICAL HISTORY: In 2004 Marco earned a very unique place in Magical history for driving across America completely blindfolded in 7 days. 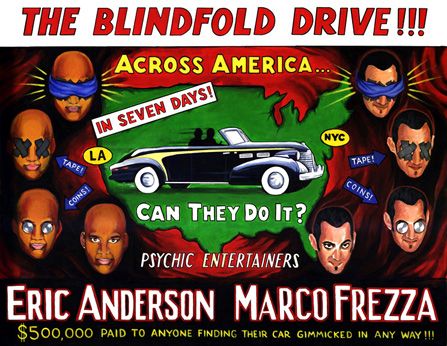 The Blindfold Drive Across America began when Marco and fellow Magician Eric Anderson had silver dollars duck taped to their eyes. Their eyes were then wrapped with 15 feet of medical gauze. Finally, they were both blindfolded with bandanas purchased from Wallmart.

Next they were escorted to a rented convertible that was inspected for any trickery or hidden gimmicks that would aid them in navigation of any sort. A video crew from Fox News sat in the back seat and documented their Blindfold Drive from LA to NYC in 7 days.

The Blindfold Drive Across America Illusion was designed and created to raise national awareness for National Foster Care Month and generated over a million dollars worth of free publicity.The illusion was seen by millions of people around the World and and was featured and broadcasted by Fox News, NBC and CNN to name a few.

To date, the Blindfold Drive Across America remains etched in the Magical history books as the largest illusion ever performed by any Magicians in the entire history of Magic.

HEADMASTER AT ONLINEMAGICSCHOOL.COM: When Marco is not driving blindfolded and performing Magic for the public, he spends his time teaching aspiring Magicians around the World how to become Magicians. As the head master of onlinemagicschool.com Marco has worked with and trained over 8000 students in over 32 countries around the World.

HOW TO BOOK MARCO THE MAGICIAN FOR YOUR EVENT? Based out of NYC, Marco the Magician is available for hire as a Close-up Magician and for his Magic Stage Show. He is regularly hired to perform at cocktail parties, birthday parties, bar mitzvahs, holiday parties, weddings and corporate events.

To get more information on booking Marco for your event call (212) 502-0148 or email marcos52weeksofmagic@gmail.com