The History of Pepperoni

By Emilio's of Morris Park

Pepperoni is one of the most popular pizza toppings in the country, so you might be surprised to know you likely won't find it in any Italian grocery store. That's because, unlike most other "traditional" pizza ingredients, pepperoni isn't Italian at all. This delicious topping is an Italian-American twist on salami that was first developed by immigrants in the early 20th century.

The word "pepperoni" means "bell pepper" in Italian. In Italy, the American pepperoni is considered a type of "salame picante," which is a catch-all term used for any kind of spicy salami. 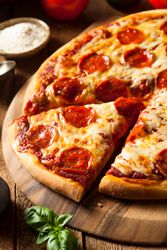 The ubiquitous American ingredient is an air-dried sausage, usually made from a mixture of beef, pork, paprika, and chili peppers. Most variations have a bright red color, a sweet, spicy flavor, and a soft texture that's more like German sausage than most Italian meats.

Where Did It Come From?

As Italians immigrated to the US throughout the 20th century, they often combined traditional dishes with readily available American ingredients. This led to some delicious innovations that are still around today, including pepperoni pizza.

Italian-American cooks likely developed a variety of salami dishes, but the word "pepperoni" didn't appear in print until 1894. While modern spicy Italian sausage was available in local Italian delis, it wasn't until the 1950s that it began to appear as a pizza topping. Some historians believe that The Spot in New Haven, CT, was the first to slap pepperoni on a pie, starting a trend that would become one of the most popular toppings in the country.

With the finest ingredients and time-honored recipes, Emilio's of Morris Park serves up the best pizzas in the Bronx, NY. They pride themselves on their selection of traditional toppings, delicious modern creations, and absolutely unbeatable service. Follow their Twitter for news and updates, call (718) 822-6758 to place an order, or visit their website to view their menu. For easy, stress-free ordering, you can also download their app by texting "Emilios" to 33733.