By Luibueno's Mexican and Latin Cuisine

Spanish cuisine holds a strong influence on Latin American food thanks to the wide reach of the Aztec Empire and its conquest. The early agricultural staples of corn, beans, and chile have always featured heavily in authentic Mexican food. Since the Spanish introduced domestic livestock to Mesoamerica, pork and chicken have become prominent ingredients as well. 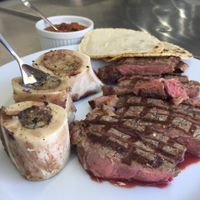 Other Latin cuisines share a lot of similarities with Mexican food, especially when it comes to crops like corn and tomatoes that originated in Mexico. However, beans aren’t as commonplace in South American food, and you’ll notice a strong Portuguese influence in South American dishes like caldo and churrasco due to Portugal’s colonization of Brazil.

Despite their differences, nearly all Latin cuisines showcase intense and varied flavors like spicy chiles, cilantro, cumin, and oregano. You’ll also notice a large amount of seafood dishes like ceviche thanks to the coastal nature of many Latin American countries.