What Happens When You’re Charged With a Misdemeanor?

A misdemeanor is a crime less serious than a felony, but more severe than an infraction, such as a traffic violation. They include offenses like trespassing, petty theft, disorderly conduct, and vandalism and carry weighty consequences. In Kentucky, misdemeanors are punishable by up to 12 months in the county jail and a maximum fine of $500, which is why it’s a good idea to enlist the help of a defense attorney if you or a loved one is charged with one.

A defendant charged with a misdemeanor is either arrested on-site and taken to jail or served a citation detailing the date and time they must appear for their arraignment, which is the preliminary court appearance. If the defendant is taken to jail, they are either released on bail or on their recognizance or remain in jail until their arraignment.

During an arraignment, the defendant appears in court to hear the charges against them. They are also informed of their rights, including the right to retain a defense attorney (if they have not already done so) or have one appointed to them if they cannot afford it. 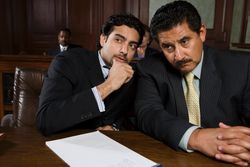 The prosecution may offer the defendant a plea deal at this time, which is a request for a guilty plea under specific terms, such as a lighter sentence or lower fine. If the defendant doesn’t accept the deal (or if one is not offered), they either plead “guilty” and face judgement or “not guilty” and a pretrial and trial date is set.

Pretrial hearings allow prosecutors and defense attorneys to work out details that will save time during a trial or avoid one altogether. This can include plea deal negotiations, requesting discovery (evidence against the defendant), filing motions for dismissal, and changing pleas.

It is up to the defendant to decide whether they want a trial by court or jury. In a court trial, a judge hears the evidence and determines if the defendant is guilty. In a jury trial, six members of the community listen to the evidence and reach a unanimous verdict together. In both cases, if you are found guilty, the judge will determine your sentence.  If the jury fails to reach a unanimous verdict, the trial will be declared a mistrial.

If you or someone you love is facing a misdemeanor, Jeremy L. Clark Attorney at Law in Catlettsburg, KY, can help. With more than a decade of experience, this criminal attorney can help you strategize a solid defense and achieve the best possible outcome for your case. Visit his website to learn more about the practice, and call (606) 739-6774 to set up a consultation today.