How Did Belgian Waffles Get So Popular?

There's nothing like going out to your favorite brunch diner and ordering a warm, doughy Belgian waffle, just the way you want it. It's the perfect morning treat to start your day with, alongside a piping hot cup of coffee. However, you may never have thought about how this Belgian breakfast delight became so popular. Here's a guide to help you understand how Belgian waffles became one of the country's hottest brunch items.

What Are the Origins of the Belgian Waffle?

Before the days of electric waffle irons, ancient Greeks would make flat cakes called obelios, cooked over an open flame between two metal plates. This recipe evolved over the years, with the addition of cinnamon and honey in the Middle Ages and then butter and sugar in the 18th century. The resulting creation, known as the Liège waffle, became a mainstay in Belgian cuisine. However, while the Liège waffle has uneven edges and a chewier, caramelized texture, the later-arriving Belgian waffle is light and crispy with defined edges and would eventually become even more popular.

How Did They Gain Popularity? 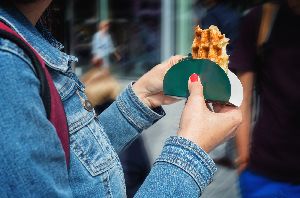 The Belgian waffle made its first appearance in America at the 1962 World's Fair. However, it was around two years later, at the 1964 World's Fair in Queens, New York, that the Vermersch family's food stand took it to the next level. Unlike American waffles, these new Belgian waffles were designed to be eaten with your hands as street food. Originally named Brussels waffles and renamed Belgian waffles to make them more recognizable, these airy, crispy dough rectangles were topped with hand-whipped cream and freshly sliced strawberries.

Where Can You Find Belgian Waffles Now?

Originally, Belgian waffles were sold in food carts and can still be found on street corners or in food trucks in cities like New York or Los Angeles. However, family restaurants and favored brunch diners caught onto the trend and typically offer this sweet breakfast dish. Many breakfast restaurants have taken the Belgian favorite and made it their own with custom toppings like powdered sugar, cinnamon, chopped nuts, fruit, even ice cream. While you may not be able to eat them with your hands the way the Belgians intended, you're sure to enjoy every delicious bite.

If you're looking to dive into a tableful of your brunch favorites, including everything from specialty omelets to Belgian waffles, visit Belgian Waffle & Pancake House in Branson, MO. Whether it's breakfast with friends or a relaxing lunch solo, their hand-crafted menu will leave you feeling delightfully satisfied. To see their menu and hours of operation, visit them online or call (417) 334-8484.