3 Ways a DUI Can Affect a Teen's Future

A DUI can not only endanger the lives of others on the road, but it can also lead to significant obstacles for an offender when convicted. Teen drivers, in particular, face severe repercussions in every aspect of their life—from going to college to having a job—all while dealing with the parameters of their sentencing.

How a DUI Can Affect a Teen's Future

For teens applying to college, a DUI conviction will not completely ban them from this opportunity, but it can become a significant factor against them in the admission process. This hurdle has faced a lot of contention in recent years, and the Common Application recently decided to “Ban the Box,” a phrase meaning they won’t ask applicants to disclose their criminal record when applying for college. While a formal disclosure is no longer an obstacle in this part of the process if a teen applies for a school under the Common App’s jurisdiction, if they need to apply for financial aid, scholarships, or housing, a background check will ultimately release this information.

For teens already in college, the university will discipline a student with a DUI on the grounds of violating the student code of conduct. They will need to attend an honor council or standards meeting coordinated by the school, and if found responsible, they will receive disciplinary action ranging from probation to even expulsion. Most universities will only require additional community service and an essay for first-time offenders of the honor code.

A DUI conviction will follow a teen as they venture into their chosen profession. While the Civil Rights Act of 1964 outlaws employers from discriminating against an applicant outright because of a criminal record, a DUI can likely move a job seeker’s application further down the pile. Particularly in positions that require driving a company car, an employer will likely pass up a candidate with a DUI on their record. This offense can have a drastic effect on a teen’s job prospects, but often showing a level of personal growth as time passes since their offense can convey to an employer that they understood and learned from the severity of their actions.

Teens that are already working might have a mandatory firing policy in their employment contract in the event of a DUI, meaning they lose their job if they commit this offense. Even if this stipulation doesn’t exist, the required court dates and community service can interfere with an existing work schedule. 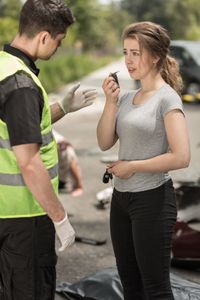 Since a teen is underage when charged with this offense, they are subject to zero-tolerance laws. This legislation found nationwide makes it illegal for a motorist under 21 to have any alcohol in their system while driving, even if their BAC is below the standard legal limit of .08%. In some states, this crime is considered an administrative offense or infraction—not a misdemeanor, making the consequences less severe. If a teen blows above the legal limit, however, they are charged with a standard DUI in addition to this zero-tolerance infraction.

Across the board, an underage DUI will result in a license suspension and fines ranging from hundreds to thousands of dollars. Depending on the frequency and severity of the offense, a teen could face jail time and community service. They could also receive preventive measures such as substance abuse classes, rehab, and an ignition interlock device installed in their car as part of their sentence.

When facing a DUI offense, having tenured legal counsel on your side can change the course of your future. The team at Coyne, Cundiff & Hillemann, P.C. has more than 75 years of combined experience on your side to defend your rights. Their attorneys have a mission to build a defense or plea bargain that helps clients follow through with the court’s necessary steps and return to normalcy as soon as possible. For more information about their full range of legal services, give this Lake St. Louis, MO, legal practice a call at (636) 561-5599, or visit them online to schedule a free consultation.