Where Did the Gyro Come From?

It’s hard to find a Greek restaurant or street food vendor today that doesn’t put gyros front and center on the menu. But while this flavorful sandwich is clearly a modern classic, it’s not quite clear where this delightful meal came from. Serving up sensational gyro platters in Manhattan, NY, Yia Yia's- Homemade Greek Food helps explore the history of this Mediterranean dish below.

What Exactly Is a Gyro?

The definitions of gyros are about as diverse as the ways the word is pronounced. However, most consider gyros to refer to warm pita sandwiches that contain thin slices of seasoned meat—typically lamb, beef, chicken, or pork. 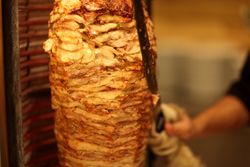 The name “gyro” refers to the turning rotation of the vertical rotisserie that holds stacks of thin slices of meat under a broiler.  When preparing the dish, cooks will shave cuts of meat off the rotisserie onto the pita and dress it up with tzatziki sauce, tomatoes, onions, and other traditional ingredients.

What Is the History of the Gyro?

It’s hard to identify the specific point of origin for the gyro, but many believe it got its start over 2000 years ago during the times of Alexander the Great. During those times, soldiers would celebrate long days on the battlefield by stacking and roasting meat on their swords. Similarly, ancient Minoan and Mycenaean Greek cultures were known to enjoy grilled skewers of meat.

More recent evidence suggests this way of cooking meat really caught on in the 19th century, when Ottoman Empire-era Turkey popularized the practice of grilling meat on a vertical spit—a dish known as doner kebab. This is likely where the modern-day gyro gained its roots.

When Turkish refugees settled in Greece in the 1920s, gyro meat was made mostly in small batches at homes and enjoyed as a family meal. But as global immigration trends increased, the dish was eventually brought into American culture.

In the 1970s, the gyro cemented its place in the global food scene, as local restaurants and street vendors began serving up the sandwich to eager food-lovers in big cities—such as Manhattan, NY, and Athens, Greece. The budding popularity of the dish led to mass production of gyro meat at innovative manufacturing plants in Chicago, IL, and Milwaukee, WI. Today, people all over the world can easily find gyros wherever they live or travel, but the flavor still remains as distinct as it did decades ago.

While there are certainly many places to grab a gyro in New York City, few match the authentic and fresh flavor that’s served up by Yia Yia's- Homemade Greek Food. Located on the Upper East Side, this fast-paced, casual restaurant prepares other classic Greek cuisine selections that are sure to please any set of taste buds, such as souvlaki, spanakopita, and moussaka. Check out their menu online, and call (212) 545-1210 to place an order for carryout or delivery today.