A Short History of Spanakopita

Spanakopita has been a staple of Greek food for thousands of years. This tasty spinach and feta pie is often served as an appetizer, but it makes a filling meal as well. Whether you haven’t tried spanakopita yet, or it’s an old favorite, learning more about the history of this popular dish will make it even more enjoyable.

The Origins of Spanakopita

The pita, or pie, is the base of many Greek foods. These are made from layers of light phyllo dough and sweet or savory fillings. Descriptions of honey and cheese pies at ancient banquets and dishes that consisted of cheese wrapped in fig leaves date back to the 5th century. The literal translation of phyllo is “leaf,” leading some to believe that modern phyllo-based foods like spanakopita originated from those pies.

Today, what many of us know as spanakopita comes from the northwest region of Greece known as Epirus. Early cooks in this region were among the first to use a variety of greens in their dishes. However, historians note that spinach didn't arrive in Greece until the Byzantine Empire. When the people realized how easy it is to grow the leafy green, it became a staple of Greek food. 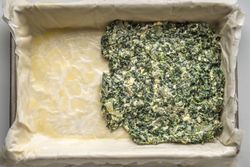 Like spinach, phyllo dough became popular in Greece during the Byzantine Empire. This buttery, flaky dough is made with flour, water, salt, and olive oil, along with a leavening agent. It is rolled into paper-thin sheets to create a crispy, pastry-like effect.

Although every chef has their own recipe for spanakopita filling, the primary ingredients are spinach, Greek yogurt, feta cheese, lemon, and scallions, along with fresh herbs like oregano and dill. The specific herb mixture used heavily influences the taste of the dish. Some cooks might also use a mixture of Greek cheeses, or replace the scallions with leeks to put their own twist on the recipe. Regardless of the specific ingredients, the result is a savory, buttery, and delicious meal for any occasion.

Try some authentic spanakopita and other fresh Greek food at Yia Yia's Homemade Greek Food in New York, NY. A staple of the Upper East Side, this restaurant’s Greek chefs serve up an array of mouthwatering cuisine, from gyro platters to souvlaki and salads. Call them at (212) 545-1210 for more information, or visit their website to view their menu.