What's the Difference Between Clams & Oysters?

Oysters and clams are both bivalves, or mollusks with a hinged shell, commonly served at seafood restaurants. Though these shellfish may appear similar at a glance, they have fundamental differences that influence everything from preparation to flavor. Below, you'll learn more about what makes each of these mollusks distinct.

Oysters often live in brackish saltwater on the East, West, or Gulf Coast. They grow in clusters known as beds or reefs and may attach to piers or rocks. Clams typically make habitats in saltwater along the Atlantic Coast but may also live in the Pacific Ocean or freshwaters.

The waters in which edible mollusks make their homes can affect their size and flavor. For instance, oysters are often smaller and sweeter in colder Atlantic waters and become saltier and meatier as waters warm up toward the south.

In general, clams have a more pungent flavor while oysters are mild and buttery. Though clams may be chewy and tough, oysters are tender and melt in your mouth. 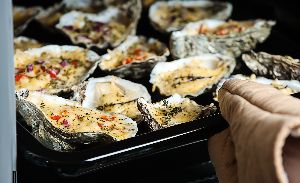 Oysters are often served raw on the half shell with a squeeze of lemon juice and a side of cocktail sauce for dipping. However, many seafood restaurants prepare them grilled or baked with toppings such as garlic butter, parmesan, spinach, and herbs.

Clams are commonly served in creamy New England chowders. They're also popular steamed and served with sides of cooking broth and melted butter for dipping.

Though both low in calories and high in protein, these shellfish contain different levels of essential vitamins and minerals. For instance, oysters contain up to 190 percent of the recommended daily value of selenium, which supports reproductive health, thyroid function, and can fight free radicals to prevent diseases.

Clams contain 130 percent of the daily value of iron, which helps the body make hemoglobin that attaches to red blood cells and moves oxygen from the lungs to other body parts.

The next time you're in the mood for oysters, dine at Tin Top Restaurant & Oyster Bar. This oyster bar and seafood restaurant serves these delicious mollusks raw, baked, steamed, and sautéed to customers throughout Bon Secour, AL, and Baldwin County. Call (251) 949-5086 to make a reservation or place an order for takeout, and visit the website to view the full lunch, dinner, and brunch menus.