How to Make Empanadas

The empanada is a popular staple in Latin American food. It is a baked or fried pastry that is filled with either sweet or savory fillings, such as beef, cheese, or seafood. Learn more about how your favorite Portuguese or Spanish restaurant creates this dish in the following guide.

A Guide to Empanadas

The History of Empanadas

The word empanada comes from the Spanish verb empañar, which means to wrap or cover in bread or dough. The name aptly describes the delicious meal or snack that features tasty fillings that are surrounded by pastry dough.

The origin of the empanada is thought to be Galicia, Spain—particularly from the Moors who occupied the country. While a Spanish cookbook from 1520 has a version of this dish stuffed with seafood, Argentina first introduced the food to the Western Hemisphere. Many Latin cultures around the globe have adapted empanadas by creating their own filling and seasonings from the area.

Empanadas are versatile. They can be a snack or part of breakfast, brunch, lunch, or dinner. They are often included in celebrations and festivals.

How Empanadas Are Made 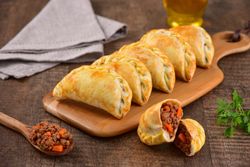 Portuguese and Spanish restaurants will often include empanadas on their menu. Even with variations, the basic approach to this creation is similar. The dough is rolled out and cut into a disc. After the filling is added, the dough is folded over to create the pocket. The edges are crimped to seal the filling inside. Dough can be made from wheat flour, corn, cornmeal, or plantain and potato bases. They can be baked or fried.

Professional chefs who are well versed in this dish agree that the trick is to hold the dough open in one hand while using the other to fill and crimp it. It is important not to overfill each disc. Each should have a nice helping of filling in the center with enough dough around the perimeter to cover it when it’s folded. Using your palm to hold the dough creates a guide that keeps you from putting too much filling inside. This keeps the pocket from leaking or exploding.

Beef is a popular choice for the filling and is usually made with stock and seasoned with garlic and other spices. Some chefs add hearty veggies, like potatoes, and many include cheese. Chicken and pork can also be used. Some recipes, including fish versions, will include olives, capers, carrots, and other strong savory flavors.

If you’re craving delicious empanadas, try Mamajuana Café Queens in Woodside, NY. This Spanish restaurant offers a delicious menu of traditional and contemporary Latin food, as well as a Dominican breakfast and brunch from noon to 4 p.m. Their Saturday brunch includes a three-course meal, and Sunday brunches are buffet-style until 5 p.m. They also provide catering and private rooms for special events. To make a reservation, call (718) 565-6454, or view their full menu online.