The three-part series continues! Previously, Door Innovation tackled a question that many business owners ask: why is corrosion a problem for commercial door frames? There, they determined that corrosion is not only a cosmetic blemish but also a threat to the business’s cleanliness, efficiency, and structural integrity. However, in that article as well as the one prior, these Brighton, MI-based door frame repair specialists focused primarily on steel. So, what about aluminum?

The Question: Why Do Aluminum Door Frames Corrode?

After reading this inquiry, you may have thought to yourself: “Wait. I thought aluminum didn’t rust?” You’re right; it doesn’t. While often used interchangeably, rust and corrosion refer to two different chemical reactions. So, when it comes to their commercial door frames, business owners should only be concerned with the latter. More specifically, these door frame repair specialists explain, you should be concerned with the two substances that cause corrosion.

As covered in Part 1 of this series, steel frames corrode because the backside of the jamb is exposed to moisture for an extended period. Aluminum frames are no different. Over time, both weathering and atmospheric oxygen cause the metal to corrode or oxidize. Unlike the flaky, reddish rust you’re used to, the resulting oxide appears powdery white or dull gray and feels slippery to the touch.

It is important to note that moisture and oxygen aren’t the only substances that cause oxidation. Electrolytes and other reactive liquids with a pH value lower than four or higher than nine (i.e. saltwater) can also jump-start the process, but are less common in a commercial setting. Additionally, if the aluminum is in contact with steel, it may then accelerate the reaction through bi-metallic corrosion. 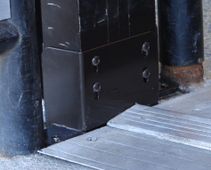 Interestingly, the oxide formed by moisture, oxygen, electrolytes, or bi-metallic corrosion creates a protective layer around the frame, protecting it from further deterioration. However, that doesn’t mean your commercial door frame isn’t at risk. Whether they’re made of steel or aluminum, corroded metal door frames pose the same threats to cleanliness, efficiency, and structural integrity. That’s why Door Innovation recommends that business owners utilize their patented jamb anchor repair kits to promptly fix the issue without replacing the door system.

Next time, Door Innovation will introduce a new topic – concrete slushing – and discuss how this process exacerbates the corrosion of commercial door frames. Until then, if you’re eager to learn more or want to order a jamb anchor repair kit, visit their website. If you have any questions about corrosion or aluminum frames, call them at (517) 518-8979.