A Brief History of Wontons

Anyone who enjoys Chinese cuisine is familiar with the spongy, meaty wonton. Most commonly served in soup, this traditional stuffed bun is one of the most well-known dumplings in the world. The wonton has an ancient history and quite a few variations. Below, you’ll learn all about the background and proliferation of this tasty treat.

The Complete Guide to Wontons

North China is recognized as the birthplace of wontons. Originally, they were referred to as “huidun,” or “chaos,” due to the crumpled wrapping of the dough. Chinese restaurants specializing in wonton soup began popping up throughout the Tang dynasty many centuries ago, quickly spreading throughout the country. Some believe they were even used for medicinal purposes and stuffed with healing herbs and plants. 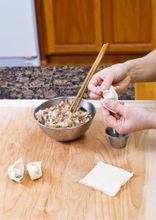 Typically, wontons are made with a thin dough stuffed with minced pork, vegetables, ginger, and various sauces and seasonings. The chef blends the chopped ingredients to create the filling. One wonton at a time, the filling is placed into the corner of the wrapping and folded to resemble a hat with a top point. At this stage, they may be boiled, steamed, or fried. Although this is the most common method of preparation, different regions have their own special ways to make these tasty treats. For instance, shrimp is traditionally used alongside pork in Hong Kong, while bok choy is common in Shanghai.

The most popular use for wontons in Chinese cuisine is soup, but you may come across the dumplings in different dishes. Some eat them with egg noodles, which bring out the chewy texture of wontons. Both soak in the salty, savory broth to bring you complex flavors in every bite. When fried, they’re generally served on their own as a crispy, golden-brown appetizer. Regardless of how you eat it, this savory treat is enjoyable in just about any form.

If you’re craving a steaming bowl of wonton soup, indulge your appetite at Hong Wah Restaurant. Serving the Penfield, NY, community, this restaurant serves delicious and authentic Chinese cuisine. Whether you dine in or carry out, you will be treated to quick service, a friendly staff, and mouthwatering meals. To view their selection of tasty Chinese food, take a look at the menu online. Call (585) 385-2808 to place a carryout order today.