The History of the Outhouse

For as long as humans have been around, nature has called. Throughout the centuries, however, the methodology for doing our business neatly and privately has evolved. While the portable restrooms of today may be robust metal containers with hand-wash stations and other hygienic conveniences, it all started with one precursor: the outhouse. Here’s a closer look at this storied lavatory.

What Are the Origins of Outdoor Restrooms?

Whether you call them outdoor toilets, outhouses, or porta-potties, the concept of a place to do business outdoors has been around for thousands of years. Even the biblical book of Deuteronomy speaks about digging a hole to do business and covering it up.

The first formal systems for disposing of that business were constructed by the Romans around 4500 B.C. with the world’s first known sewer system. Even then, the idea of keeping business “separate” from life was important.

How Did They Evolve? 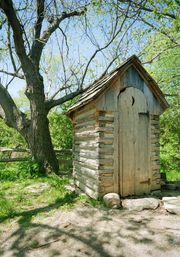 The point where having a constructed space to do your business first became popular was the garderobe–-a space in a castle wall containing a toilet that would discharge directly into the moat below. The commoners, meanwhile, made do with their chamber pots.

While the flush toilet was invented just before the 1600s by Sir John Harrington, it didn’t make the idea of a bathroom an immediate success. This only became a prominent feature in early U.S. colonies. At this time, many American settlers would set up outhouses on their property, digging a 3–6 foot hole and building a small cubicle around the toilet.

Outhouses not only provided a private place for people to use the restroom, but it also allowed them to avoid having that waste contaminate other areas. Bacteria in water sources or on other surfaces could lead to typhoid fever or cholera.

Rural outhouses are the most popular option that has stayed around to the present day, although they are fairly rare. Urban outhouses were popular in some areas during the early 1900s and even had multiple units within them, but public health worries would soon lead to them falling out of favor, unlike their country counterparts. Once indoor bathrooms with plumbing became common in the 1930s, it was up to the advent of the portable restroom to keep the tradition alive for outdoor events, construction sites, and other locations in need of temporary facilities.

When you’re looking for portable restrooms, choose Baldwin Portable Toilets in Seminole, AL. The company has over 45 years of experience providing restroom trailers, porta-potties, and even portable sinks for any size event or duration. To reach out about a rental, visit them online or call (251) 946-3000 to speak to a representative.