4 Things to Know About Moving to Seattle

By Safe To Go Movers, LLC

If you’re long-distance moving to Seattle or moving locally from another city in Washington state, there are a few things you should know. The Emerald City may be known for its coffee, grunge music, beautiful evergreen forests, and rainy climate, but the city is so much more than that.

What Should I Know About Moving to Seattle?

1. Each Neighborhood Has Its Own Culture

It’s not as simple as saying, “I’m moving to Seattle!” The city is composed of different neighborhoods that have their own unique culture. That’s good news for anyone long-distance moving from outside the area since one can easily find a community that suits their lifestyle. Capitol Hill is a funky, artsy neighborhood where residents can walk or bike to music venues and coffee shops. For something more secluded and quiet, there’s Magnolia in Northwest Seattle, which prides itself on hiking trails, parks, and shops and restaurants.

2. Seattle Isn’t Rainy All the Time

Seattle is known for being a rainy, gloomy city. It experiences an average of 152 rainy days per year, which is higher than most cities in the United States. However, the amount of rain that actually falls isn’t very much: it’s usually less than one inch per rainfall. Other cities like Portland, New York, and Atlanta get much more rainfall than Seattle.

3. There Are Lots of Places to Enjoy Nature 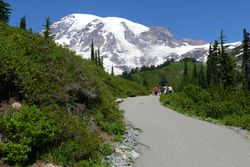 Thanks to Seattle’s temperate climate and beautifully sunny summers, there are plenty of opportunities to get out and enjoy nature. Kerry Park, on the south side of Queen Anne Hill, has picturesque views of the city, while Washington Park Arboretum has over 200 beautiful acres for visitors to explore. Get out of the city with day trips to Mount Rainier or Olympic National Park.

4. Cost of Living is Higher Than Average

Seattle living isn’t cheap: it’s about 49% higher than the national average, making it the 7th most expensive city in the country. However, anyone long-distance moving from outside Washington might consider cities in the Greater Seattle area, like Puyallup, Everett, Tacoma, or Olympia, where the cost of living may be lower.

When you’re ready to start your long-distance moving journey, call us at Safe to Go Movers. Our fully licensed and insured moving company has been serving Tacoma, Puyallup, Federal Way, and Greater Seattle for nearly a decade. Planning a move can be stressful and overwhelming — let Safe to Go Movers take care of it for you. Call us at (253) 268-9400 for a free estimate, or learn about our long-distance moving services on our website.