4 Interesting Facts About the American Flag

Also known as Old Glory or the Stars & Stripes, the American Flag plays a critical role in U.S. culture and history. Despite its ubiquitous presence in every aspect of life, from schools and sporting events to front yards, porches, and businesses, some features of the U.S. Flag remain unknown to many Americans. Here are a few facts about the U.S. Flag that you may not be familiar with.

What to Know About American Flags

1. There Have Been 27 Different Versions

You’ve likely seen the classic 1777 flag with 13 stars and stripes for the original colonies. Since that famed first draft, the American flag has been through 27 iterations. Each additional state resulted in a new star, with Hawaii’s inclusion providing the 50th star in 1960. Originally, the U.S. added a stripe with every new star, but lawmakers realized this could be difficult as we added states. The flag reverted to 13 stripes to represent the original colonies after previously featuring 15 stars and 15 stripes, the flag which actually is known as the Star Spangled Banner.

2. The Current Flag Is the Longest-Lasting 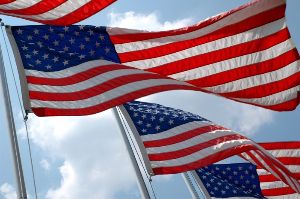 No changes have been made to the flag since Hawaii joined the union. With no new states to require an adjustment, the current 50star flag has had the longest run in American history at 61 years. It is the only version to last more than 50 years. The most recent design was created by 17-year-old Robert G. Heft, who made it for a high school project.

3. Old & Damaged Flags Can Be Retired

If a U.S. Flag gets dirty, it can be washed or dry-cleaned. However, when American Flags touch the ground, become faded, or are tattered beyond repair, they should be retired and replaced. There are proper and dignified methods of disposal. According to U.S. Flag Code, burning is the preferred method of retirement. You can hold a respectful flag burning ceremony, but some may prefer to bury it. You can also drop it off at an American Legion, Girl Scouts, or Boy Scouts.  Harbortown Flag also accepts retired flags, which are picked up by the Scouts for flag burning ceremonies.

4. Six Flags Have Been Planted on the Moon

Since Neil Armstrong planted the first American Flag on the moon in 1969, five additional U.S. Flags have joined it. These came from Apollo missions 12, 14, 15, 16, and 17. NASA’s Lunar Reconnaissance Orbiter has confirmed that at least five out of six are still standing, but they may have been bleached white by the strong ultraviolet rays of the sun.

For American flags of various sizes and materials, visit Harbortown Flag in Vermilion, OH. For 28 years, this local shop has offered high-quality flags, poles, and accessories made in and sold throughout the USA. In addition to U.S. flags, they carry historical, state, territory, military, nautical, international, sports flags, and more, in sizes ranging from 4x6" to 50x80'. Visit them online to learn more. To ask a helpful team member about available products, call (440) 967-FLAG (3524).