History of the American Flag

The American flag, with its vibrant colored field of stars and stripes, is a national symbol, but many people have no idea of its history beyond the story of Betsy Ross. Learn about the history of this beloved icon in the article that follows.

The Story of the American Flag

Historians don’t know the exact origins of the first American flag. One popular theory suggests that it was designed in 1776 by a New Jersey delegate to the Continental Congress, Francis Hopkinson, and sewn by Betsy Ross, a seamstress living in Philadelphia. The Continental Congress passed an act establishing the Stars and Stripes as the official flag on June 14, 1777.

When people call the American flag “Old Glory,” they’re referring to an actual flag owned by William Driver, which supposedly survived multiple attempts to destroy it during the Civil War. Driver eventually brought the flag to Nashville, where it was flown over the Tennessee Statehouse at the end of that bloody conflict.  It’s now housed in the National Museum of American History. 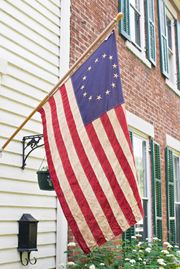 The Star-Spangled Banner was designed purposefully, and every aspect of its composition has meaning. The 13 red and white stripes are symbolic of the original 13 colonies, and the 50 stars symbolize the 50 states. The color red represents valor and strength, white represents innocence and purity, and blue conveys the qualities of perseverance and justice.

Evolution of the Design

The American flag has changed as the country has grown. The first flag sewn by Betsy Ross had 13 stripes and 13 stars arranged in a circle on a blue field.  In 1795, a new design emerged with the addition of two new states—Vermont and Kentucky. It had 15 stripes and stars, with the stars arranged in five staggered rows of three stars each. This flag is now known as the Star Spangled Banner, and is available with standard or tilted stars.  The number of stripes returned to 13 in 1818, and stars were added in varying patterns with the admission of each new state. In 1960, the flag we see today, with 50 stars, was completed with the addition of Hawaii, the 50th state.

Don’t forget our Annual 20% Off Special is currently running thru 12/15/19.  Mention this post for your Extra 20% Savings off our Everyday Discount Pricing!  *Clearance specials do not qualify.

If you need a U.S. flag for your home or business in Vermilion, OH, Harbortown Flag has numerous sizes and materials to choose from. They stock flagpoles and accessories, as well as Made-in-the-U.S.A. American flags, states & territories, historical flags, military & POW/MIA flags, sports teams, advertising flags & more. They also offer additional discounts on U.S. Flags to active military personnel, veterans, churches, and schools. Call (440) 967-FLAG (3524), or visit them online to see a sample of their range of products.