A Guide to Swollen Gums

Swollen gums can occur for a variety of reasons, including lack of care and aggressive brushing. Fortunately, there are several steps you can take to prevent further damage and restore the health of your gums. For optimal general dentistry, it's wise to care for your gums. Here’s a closer look to ensure the proper level of care. 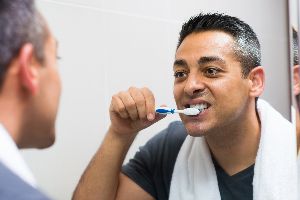 One of the primary causes of swollen gums is brushing too vigorously. The pressure from the bristles irritates the soft tissue and produces temporary inflammation. Flossing is also a potential culprit. If you use too much force, then the material may rub the gums raw, which will naturally cause swelling.

On the other hand, it could be a bacterial issue. The mouth contains thousands of these tiny organisms and neglecting to clean your teeth could allow them to infiltrate the gums. Over time, this will produce a disease known as gingivitis, which targets the areas surrounding each tooth and increases the possibility of an extraction.

What Treatments Are Available?

The simplest way to preserve the health of your gums is to use an antibacterial mouthwash and toothpaste. These products are specially made to fight infections and should clear up your gums within a few days.

If the swelling has been going on for several weeks, then the dentist may suggest a round of antibiotics. These will eliminate the bad bacteria and allow the soft tissue a chance to recover. For extreme cases, you might have to undergo a process known as scaling. This is when the dentist scrapes away the damaged parts of the gums in order to allow the surrounding areas to heal.

How Can I Prevent Swollen Gums?

Look for a toothbrush that has soft bristles. These are a little more flexible than their stiff counterparts and reduce the risk of accidental damage. As far as flossing goes, try sliding it back and forth. This will gently work out the bits of food from in between without causing excessive amounts of friction. Drinking water is another effective form of protection. It naturally boosts saliva production and keeps harmful plaque from developing along the edge of your gums.

Ensure optimal oral health by reaching out to John D. Mainwaring, DDS of Orange, CT. This family practice has been providing general dentistry services for all stages of life. From routine checkups to partial dentures, these professionals will provide what you require to make an informed decision about potential treatments. Call (203) 799-6625 to schedule a general dentistry appointment or visit their website for additional information on their services.