How Popcorn Became So Popular

Popcorn is one of the most beloved snacks in the United States. Whether it’s a microwave bag or a bottomless bucket at the cinema, this treat can be prepared and enjoyed in a number of ways. Gourmet popcorn, such as caramel corn, is the most popular trend taking the country by storm. Here is a brief overview of how popcorn grew in popularity, from the beginning to the present day.

When movie theaters first came around, they aimed to target a high-end, artsy crowds, which is why they would not admit snacks that could distract from the film. Although these films were silent during this time, the sound of chewing could easily be heard throughout the theater. However, popcorn rose in popularity during the late 1920s as a staple movie theater snack. Guests could watch films on the big screen while munching away silently on this delicious treat. Kernels were also cheap and easy to attain, making it the best and most affordable snack choice during the Great Depression. Finally, the sugar shortage during World War II sealed popcorn’s fate as the number one snack; sugar was sent overseas to the troops, meaning other popular snacks couldn’t be made, but kernels were never low in supply. 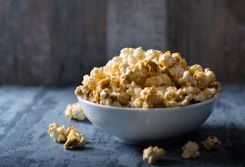 The concept of sweet popcorn originates from the Dutch who settled in the state of Pennsylvania back in the 1700s. It was named kettle corn after the process in which the kernels were cooked; they were put in a kettle with oil, sugar, and salt. This sweet and salty treat was sold at fairs or other communal festivities. Caramel popcorn was created in the 1800s. Rather than being cooked in both sugar and salt, the popped kernels were coated in caramel and became popular at carnivals, fairs, and circuses. Nowadays, gourmet popcorn can be enjoyed in many ways. You can fill a decorated tin container with one or various flavors to give as a gift during holidays, birthdays, housewarming parties, and other special occasions. It’s also the perfect treat to enjoy while watching a movie or as an after-dinner snack. There are also countless other flavors to choose from, including a savory cheddar and kettle corn.

If you’re interested in sampling some delicious gourmet popcorn, head to the Cracker Box Caramel Pop in Lander, WY.  This family-owned and -operated mobile vending machine offers a variety of delicious gourmet popcorn flavors, backed by a 60-year-old recipe. Their products also come wrapped in a gift box, so you can share with others or keep it for yourself. Give them a call today at (307) 335-7020 to speak with a representative, or visit their website to browse their full list of products.