What's the Difference Between DUI & DWI in Missouri?

If you've been stopped in Missouri while operating your vehicle under the influence, you may be facing a "driving while intoxicated" (DWI) charge. A similar term you may have heard is "driving under the influence" (DUI). Since the phrases are so similar, you may wonder whether there is a difference. The information below will clear matters up.

Which Is More Serious? 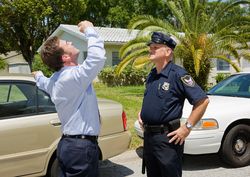 In most cases where the terms are separate, DUI is typically considered the more serious offense. However, in states like New York, DWI stands for "driving while intoxicated," while “driving under ability impaired” (DWAI) is a less serious offense.

What Is the Difference in Missouri?

Under Missouri law, the preferred term is DWI. If DUI is used at all, it refers to the same charge.

This charge happens when someone over the age of 21 is found to be operating a vehicle with a blood alcohol content (BAC) level of 0.08% and above. People under the legal drinking age can be charged with DWIs if they drive with BAC levels of 0.02% or higher.

If you've been charged with a DWI in Missouri, Traffic Law Firm in Troy, MO, will assist. Attorney Peter Lassiter, who spent 10 years as a prosecuting attorney, understands different sides of the law, which he uses to his clients' advantage. He also helps with reckless driving charges, speeding tickets, and charges regarding driving with suspended licenses. Visit his website to learn more about his DUI work or call (636) 462-7867 to arrange a consultation.