A Brief History of Barbecue

Barbecue is the pinnacle of American cuisine, providing a unique combination of flavors that are both savory and sweet. It appeals to a variety of tastes and commonly makes an appearance at outdoor events. While there isn't much information about the origins of this dish, it's easy to see how it became popular over time.

Tribes on the island of Hispaniola were one of the first to develop a method for cooking meat over an indirect flame. They would use green wood to keep the fire from burning too hot and to create a smoky flavor, hanging the meat high overhead to ensure a slow roast.

Around the late 1400s, Christopher Columbus and the Spanish explorers came to the region and were introduced to the dish. They began referring to this style of cooking as “barbacoa”, which describes the technique of setting a framework of sticks on posts and bringing them on their travels. 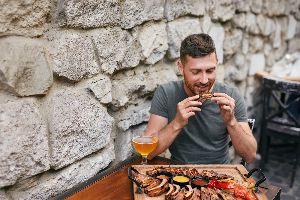 Since barbecue is such a simple way to cook, it quickly gained popularity among the coastal colonies. As people continued to move about, the dish soon made its way south, traveling along the Appalachian Mountains and through the Carolinas until it came to the Mississippi region.

The duration of the roast made an ideal opportunity to gather with friends and family, providing the time to set up a large eating area and indulge in the fruits of their efforts. Election candidates and local officials recognized its ability to attract the public and began offering food at their outdoor events.

Roadside stands and restaurants came into the picture toward the end of the 19th century. The owners would experiment with their own dry rubs and sauces, eventually transforming the dish into what it is today. Word soon spread throughout the community, and people would travel for miles to sample some of their wares.

If you’re looking to sink your teeth into a plate of fresh barbecue, stop over at JC Supper Club in St. Louis, MO. Their highly-skilled kitchen staff uses only the finest ingredients and offers a full menu of quality eats. Ordering is available through DoorDash® and GrubHub®, or you can call (314) 755-1923 to book a private event. Visit their website to view their menu.