3 Tips for Becoming an Esports Streamer

As video games have become increasingly popular, so has competitive esports. Live games online often attract large followings as other users watch professional gamers’ exploits. Whether you’re looking to create video games on your own or develop a career as an esports streamer, here’s how to do it well.

How to Become an Esports Streamer

In the world of esports, gamers have organically fallen into two distinct player personalities. The first is known as play-by-play casting, in which the gamer gives a running account of everything that’s going on at the moment. This can include explaining why they made a particular move or narrating what they expect ahead.

There’s also color casting, which uses talk a little more sparingly; the caster mainly speaks when the action dies down. Figuring out which style you’re more comfortable with helps you build a gamer identity. 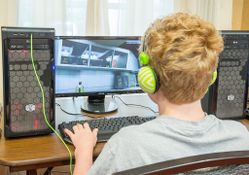 It’s unwise to jump into a game without having played it before and expect to generate excellent content. Generally, people follow esports gamers because the players are effective and knowledgeable about a particular game. Put in plenty of practice before you start broadcasting.

Being a serious esports player is an intensive pursuit. Many gamers crave followings, so you’ll need to stand out. One way to do that is to put out your casts as frequently as possible—as long as they’re quality, of course.

By streaming a lot, you prove that you’re committed. It should also help recruit new followers on Twitch® or YouTube®. The more you work on your craft, the more engaging your content will be.

If you’re interested in learning how to create video games, check out Game Camp Nation, a virtual camp that teaches kids and teens to build their own games. Offering small classes and using tools favored by veteran game creators, it’s an amazing learning opportunity for any kid. Learn about current camps and more by calling (888) 663-9633. If your in-person camp is canceled due to COVID-19 and social distancing, get $200 off a virtual session plus full credit for the canceled session. To sign up for learning how to create video games, visit the virtual learning center’s website.

“This summer will be my son's fourth summer at Game Camp. The first two years he went for one week, last summer he went for two weeks, and this summer he's so excited that they added weeks to our location and he's going for three! He looks forward to it ALL YEAR. He has so much fun and learns a ton. The staff is amazing. Highly recommend!” – Kristy S. L., Facebook