What Does Sap Bleeding From a Tree Indicate?

Proper tree care goes beyond regular watering and routine pruning—it also involves understanding certain changes in trees. When a tree bleeds or weeps sap, most property owners often assume it is sick or probably dying, but there are many reasons behind the occurrence. Here's what you should know.

Sap is an essential substance that carries water, nutrients, and hormones throughout a tree for healthy growth and development. It is transported via two tissues—xylem and phloem. When something disrupts the tissue system, sap may come out of the tree. 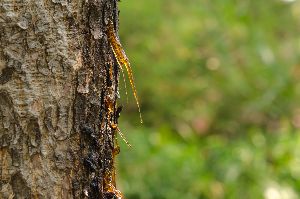 As part of routine tree care, pruning can cause heavy sap bleeding if done in early spring. During this period, sap levels are higher for certain varieties, so bleeding is expected.

Another probable reason behind excessive sap bleeding is the presence of disease or pests. For instance, the bark beetle lays its eggs under bark surfaces, and once the larvae hatch, they create tunnels through the tree. In response, the tree produces sap to cover the holes as a defense mechanism, preventing the insect from reproducing.

Fungi and diseases also cause a tree to weep sap. The bacterial infection wetwood, sometimes known as slime flux, results in heavy sap bleeding through cracks and wounds in the bark. While it may not kill the infected tree, it contributes to its deteriorating health.

What Are Some Common Sap-Bleeding Trees in North Carolina?

Some tree species in North Carolina are more likely to bleed sap during pruning. The following tend to produce and let out an excessive amount of sap when the limbs or bark are injured or damaged:

What You Should Do

Once you know which varieties are bleeders, you must research the best times to prune or trim. Choose the periods when they’re likely to be dormant and won’t produce sap.

Generally, prune deciduous trees like birch, beech, maple, and elm in late winter and early spring. Sap will come out but will eventually stop. Avoid covering or painting over the wound as it does more harm than good.

If you suspect that one of your trees has problematic sap bleeding, turn to Arbor Masters Tree Service for prompt tree care. Based in Summerfield, NC, they offer a broad range of tree services for properties throughout the Triad area, including pruning, mulching, stump grinding, and tree removal. Visit them online to learn more about their services, or call (336) 643-9157 to request a quote.