A Brief History of Trade Schools

Vocational education and trade schools have played an integral role in society since the beginning of civilization. From apprenticeships to real-world training, they prepare students for technical careers that play a pivotal role in society. Graduates have helped shape and manage the world, and there’s a fascinating history behind it all. If you’re thinking of enrolling, explore the heritage below that you’ll be joining.

Before the modern concept of a trade school or college existed, people learned through apprenticeships and guilds, dating back as early as 626 BC with the Neo-Babylonian Empire. Hands-on work, such as blacksmithing, masonry, and pottery work all required extensive training to master. Students learned either directly beneath a designated master or by joining a trade guild that provided the necessary skills to become proficient. This remained the standard for thousands of years around the world, and the more traditional trade schools weren’t established until Western industrialization created the mass demand for skilled laborers.

When child labor was outlawed in the 20th Century, factory owners required more skilled workers to take their places. To support this, the Smith-Hughes Act was passed in 1917 to support federal funding for vocational education in the United States. Rather than earning a college degree, students could become certified to work in technical professions, such as electrical work. 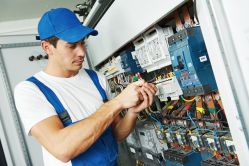 Despite the organization and support, however, the programs were relatively exclusive to poor and underprivileged students with no access to the core curriculum of a college education, ultimately limiting career advancement. To change this, the Perkins Act was passed in 1990 so that people could begin exploring trade schools while in high school, giving them the opportunity to learn a technical skill while also receiving all the core and liberal arts education needed for new career choices later in life. This encouraged more people to explore trade schools, which is why they’ve become a means for numerous students to find employment unique to their goals and experience.

Berk Trade and Business School has been a leading educator for residents of Long Island City and the New York City metro area for over 70 years. Established in 1940, they’ve provided comprehensive training for a variety of technical careers, including electrical work and plumbing. They pride themselves on giving students ample access to instructors, convenient schedules, and assistance with job placement. If you’re interested in enrolling, call (718) 729-0909 and visit their website to explore their programs. You can also connect with them on Facebook for additional resources about trade schools.