The History of Marinara Sauce

Marinara sauce is a rich staple in modern Italian food. It’s widely popular in the United States, with uses varying from pasta sauces to pizza sauces, and understanding how it came into existence can give you a deeper appreciation for it—as well as inspiration for making your own. Below is a brief overview of the sauce’s history and modern uses.

There’s a fair amount of uncertainty around the exact origin of marinara sauce. It’s known that it originated in southern Italy sometime after tomatoes were introduced to the country in the 17th century, and it started off as a pasta sauce.

Many thought that it gained popularity through sailors, who could make pasta and marinara sauce quickly while at sea for a filling dish, which was made from ingredients that didn’t spoil quickly on voyages. It contained tomatoes, olive oil, garlic, and dried herbs like oregano and basil. Diced garlic was sautéed in the oil, then diced tomatoes, water, and herbs were added and simmered until the sauce thickened.

The earliest records of marinara sauce are in Italian food cookbooks dating from the late 1600s, such as the tomato sauce recipes in Antonio Latini’s Lo scalco alla moderna, which was published in 1692. Marinara was introduced to and gained popularity in America during the 20th century, when Italian immigrants brought the dish over, which was shared through authentic Italian food places and communities. 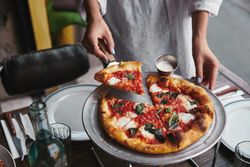 Marinara is extremely versatile, both as a base for other recipes and on its own. The classic recipe on its own can be used as a sauce on pizzas and pastas or as a dipping sauce for breadsticks and mozzarella sticks. It’s popular on meatball sub sandwiches, often topped with parmesan or mozzarella cheese.

You can also mix it up, adding your own ingredients to the base recipe to tailor it for the dish you’re making. Seafood—like shrimp, mussels, or crab meat—can be added to the sauce and served over pasta. If you add dried red pepper to a basic marinara, you get an arrabbiata sauce.

Anchovies can be thrown in for a puttanesca. Butter, extra herbs, and wine can be added for richness, depth of flavor, and to customize it to your tastes. Add-ins like mushrooms, onions, and sausage are also popular.