A Brief History of Pizza

Pizza is among the most popular foods in the U.S., with one in eight Americans consuming the beloved dish each day. Featuring crispy dough, savory sauce, and creamy cheese topped with fresh meats and veggies, these pies have a fascinating history that dates back thousands of years. Here's more about the origins and evolution of this widely enjoyed dish.

Flatbread is an early form of pizza that has origins in ancient cultures. The Etruscans, who lived in Northern Italy before the Roman Empire's formation, ate a leavened flatbread made with olive oil known as focaccia. Persian soldiers in the army of King Darius I enjoyed baked flatbread with cheese and dates. Ancient Greeks prepared plakous or a flatbread topped with onions, garlic, herbs, and cheese. Perhaps the closest ancient relative to modern pizza is pinsa, which Romans prepared by baking dough flavored with salt, olive oil, and herbs on a stone heated by ashes. 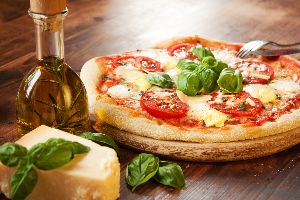 Following the arrival of tomatoes in Europe in the 1700s, the people of Naples, Italy, began adding them to flatbread, and modern pizza was born. One of the first popular pies to emerge from Naples was the marinara, which featured wheat dough topped with tomatoes, garlic, and herbs then baked in a wood-fired oven. Another popular pie was the Margherita, made for Umberto I and Margherita of Savoy, King and Queen of Italy. Featuring tomatoes, mozzarella, and basil, it paid homage to the colors of the Italian flag. Due to their low-cost ingredients and simple preparation, these pies became popular throughout Italy and were sold as street food to enjoy on the go.

Arrival in the U.S.

When you crave delicious New York Style pizza topped with your favorite ingredients, head to Roma's Pizza & Pasta. This Italian restaurant offers specialty pies along with calzone, stromboli, and pasta dishes to hungry patrons throughout Springboro, OH. Call (937) 790-1000 or visit online to place an order for carry-out.