Creole and Cajun food use European cooking methods adapted for South Louisiana ingredients. Though they're both flavorful and delicious, these two similar cuisines have several characteristics that distinguish them from one another.

How Do Creole & Cajun Food Differ?

Creole cuisine was developed by French and Spanish settlers of New Orleans. These wealthy families wanted their food prepared in European styles, so Governor Bienville's personal cook taught their chefs how to make versions of their favorite dishes using native ingredients.

Cajun cuisine originates in Southwest Louisiana, where many Acadians settled following their exile from Acadia. These Francophone settlers lived off the land, which consists primarily of prairies and swamps, and adjusted their French cooking techniques to the region's wild game and produce. 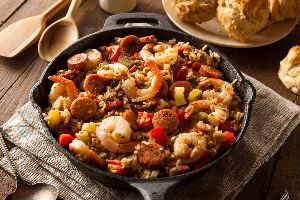 Ingredients in Creole cooking include shellfish, snapper, and pompano found in Gulf Coast waters. This cuisine may also include native vegetables and legumes, such as vegetable pears, winter squash, and pecans.

Cajun settlers were trappers, so they often caught and cooked with wild game, such as crawfish and alligator. Many dishes also include Gulf seafood and white rice grown in the region's prairies.

Creole food is associated with city life, as it's rich, refined, and delicate. Many dishes start with a roux made from butter and flour to thicken the sauces. Creole dishes are also typically creamier and prepared in smaller servings.

Cajun food, associated with country life, is more laid-back and usually cooked in one pot. Cajuns often prepare larger portions to bring people together over delicious food. These dishes more traditionally start with a roux of oil or lard and flour due to the limited availability of butter during the cuisine's development.

Creole seasonings feature various spices, such as file from the Choctaw, allspice from the West Indians, and garlic from the Italians. Cajun food includes red pepper from the Spanish and regional peppers, such as cayenne and tabasco, making this cuisine spicier.

When you're craving Creole or Cajun food, head to Gulf Shores Restaurant & Grill. They offer classic dishes, such as gumbo, jambalaya, and red beans and rice, to hungry patrons throughout Creve Coeur, MO (314) 878-3306 and Edwardsville, IL (618) 650-9109 to order southern coastal cuisine for takeout, and visit their website to learn more about their seafood dishes.