A Guide to Bird Irruption

Many bird species migrate in the spring and the fall. Other species remain largely in a given range and are referred to as resident birds yet drifting around to available food resources. In the fall migration there are bird species that are long-distance migrants where they leave the continent and travel from northern areas to the tropics. There are short range migrants that may only move a few hundred miles. There are partial migrants where some remain and others drift away. Then there are lateral migrants that move east to west. Some bird species in the U.S. may move to southern states while bird species from Canada’s Boreal Forest moves into areas of the upper and central U.S. These are all regularly occurring migrations.

Some may think birds migrate south in the winter because it is too cold for them to survive in the northern frigid temps. But that is not the case. Bird migration is driven by food availability. For example: If you are a bird that is insectivorous (only feeds on insects) you need to leave and head south for the winter due to lack of insects. Other birds that remain in northern climates during the winter can survive on other natural foods such as seeds, berries, and nuts. They will establish numerous winter food plots during the fall months where they know food is available when winter sets in. 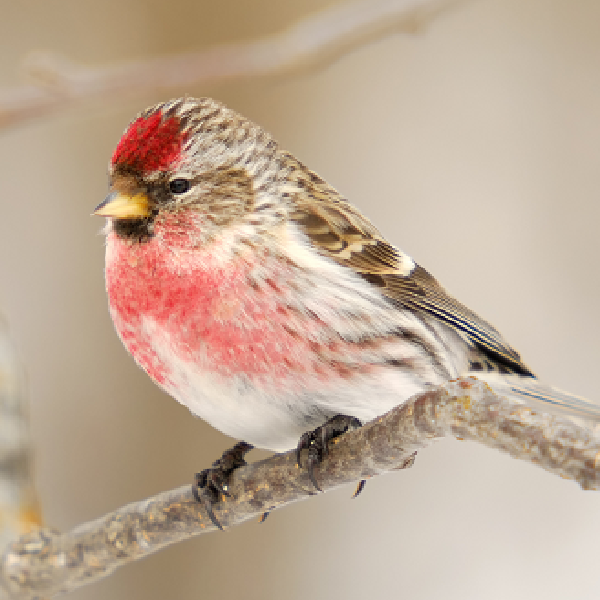 But different than the regular migration of bird species are what are called “bird irruptions”.  Occasionally birds that often remain in Canada’s Boreal Forests regions during winter may move south in large flocks. These irregular southward migrations are known as irruptions. They may show up during the winter in areas of the U.S. attracting much attention from bird enthusiast.

A small number of these beautiful bird species that regularly remain in Canada during the winter, Red Crossbills, White-winged Crossbills, Common and Hoary Redpolls, Evening Grosbeak, Purple Finch, and Pine Sisken to name a few, will drift into the U.S. every winter. But on occasion they will arrive in large numbers and can be observed in many areas, including at backyard bird feeders. 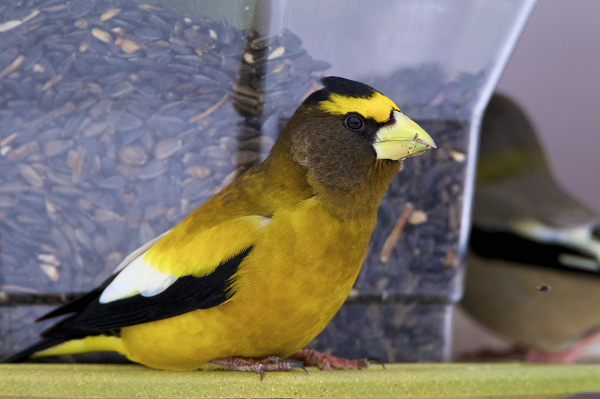 Irruptive birds move south when there is not enough food to support their populations in the north. Again these irruptions, as with migration, are food driven. And that lack of food availability driving an irruption of some bird species is usually caused by weather. Large flocks of crossbills may drift south if there is a lack of cone production in conifer forests due to dry weather in the spring and summer months. A few years back there was an unusual irruption of Snowy Owls due to a collapse in the lemming population, a small rabbit like animal and a vital source of winter food for these birds. Heavy snows may also drive birds further south during the winter if those food resources become buried by deep snows for long durations.

Other factors that may result in a bird irruption is a successful nesting season where the increased population of some bird species exceeds the availability of food to support those increased numbers during the winter months. The bottom line is whether it is the annual bird migration or bird irruption, it is all drive by food and has little to do with cold temperatures.

So keep a sharp eye on your backyard bird feeders during the winter months. You never know when an irruption of a bird species may occur. When they do it can be very exciting. Alert you’re local bird club, birding retail store, or other birders so they can enjoy seeing these beautiful birds that infrequently visit us over winter.

The Boreal Forest of Canada:

During spring migration more than 3 billion birds fly through the U.S. to their breeding grounds in the Canadian Boreal Forest. Over 5 billion birds (adults and offspring) fly south from the Boreal each fall after the nesting season. 60% of these migrants spend the winter in the U.S. — making it the largest wintering grounds for boreal birds such as Yellow-rump Warblers, White-crowned Sparrows, Rusty Blackbirds and Ruby-crowned Kinglets. The responsibility of the Boreal in sustaining some bird populations is startling.

The Boreal Forests are under extreme pressure from logging, mining, and oil production including the developing tar sands region. Some bird specie’s populations that breed in the Boreal Forests have already declined by as much as 90%. Birds have no international borders or state-lines when it comes to the conservation of bird habitats and neither should we. Find out more about the Boreal Forests of North America at: www.borealbirds.org

When you need birdhouses and feeders for your yard, contact Wild Bird Habitat Store. Since 1993, the Lincoln-based location has been helping bird lovers throughout Southeast and Central Nebraska, as well as Northern Kansas and Western Iowa. Their inventory boasts an assortment of bird feeders in a variety of sizes and styles to suit your taste. They also offer birdseed and bird baths to complete your avian sanctuary. Call (402) 420-2553 to speak to a team member about your needs. Visit the website for more information about their products.